During my mom’s senior year of high school, her family hosted a Norwegian exchange student, and they’ve stayed in touch with her ever since. Fast-forward many years later to when I was in middle school: we were lucky enough to visit this Norwegian friend and her family on their small island in Norway (there’s a theme here somewhere). While much of that trip is obscured in my memory by my own awkwardness (it was middle school, remember), I do recall the amazing food we ate there. My mom’s friend made these flaky butter biscuits with seeds on top, and before we left I asked her for the recipe. She said something along the lines of, “Make the dough and put butter on it, then roll it out and put more butter on it, and keep doing that.”
Not very specific, but all you need is that general principle: roll copious amounts of butter into dough and it will bake up light and flaky. Our favorite Providence bakery follows this idea to the letter.
And it only took me 10 years to actually try it myself!
The base for these cinnamon rolls is a Scandinavian coffee cake, which becomes light and flaky after it’s been rolled with butter and left alone to contemplate the joys of milk fat. I like to think that if I hadn’t gotten out of control and sprinkled cinnamon sugar on top, too, this dough would have turned into something very like those buttery Norwegian biscuits. But in the end, I don’t really care that much. These cinnamon buns are amazing.
However, there were just a few slight problems while baking. Remember how we have to adapt to our circumstances as we cook at the island? Well, during the making of these buns I… 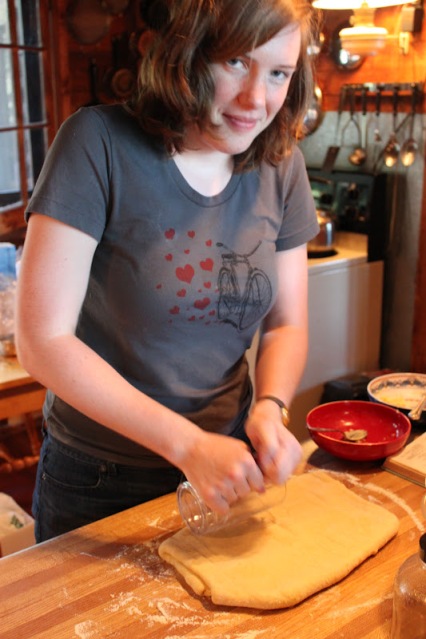 All in a day’s baking, though, right? Just think, when you try out this updated recipe in the comfort of your modern kitchen, it will seem downright easy. Or at least it will to me, when I make these again.
Because I will be making these again. These cinnamon buns are glorious. The copious amounts of butter may send the Wellness Brigade into hysterics, but hey, it’s vacation (as I justified it). They’re as flaky and light as those Norwegian biscuits, and just sweet enough to feel like a dessert or a sinful breakfast.
Lesson learned: those Norwegians (and 1960s American Joy readers) know how to live.
Cinnamon Buns (Snails)
(adapted from The Joy of Cooking, 1967 edition)
for the dough:
2 eggs
¾ cup warm water
2 ¼ tsp active dry yeast
4 cups all-purpose flour
1 tsp salt
2 tbsp sugar
2 cups butter, divided
for the filling:
1/3 – ½ cup brown sugar
1/2 – 1 tsp cinnamon
To make the dough:
Beat the eggs together in a small bowl, then add the water and the yeast. Stir to dissolve and let sit in the refrigerator for 15 minutes.
Meanwhile, mix the flour, salt, sugar, and ½ cup butter together until well blended. When the yeast mixture has proofed, make a ring of the flour mixture in the bowl and pour the yeast mixture into the center of the bowl. Stir to combine. With your hands, knead the dough for about 2 minutes, until most of the floury bits are incorporated. Cover the dough and let it rest in the refrigerator for about 20 minutes.
Beat the rest of the butter until it’s creamy, and prepare a floured surface. When the dough has rested, turn it out onto the floured surface and roll into an oblong shape about ½ inch thick. With a knife, smear about ¼ of the butter onto 2/3 of the oblong dough, like so:

Then fold the unbuttered third of dough onto the center third, and fold again over the last third. The dough should look like a pamphlet. Rotate it 90 degrees and roll out the dough again to 1/2 inch thickness, and repeat with the next ¼ of butter. Continue to fold the dough, rotate 90 degrees, roll out, and cover with butter until you’ve used all the butter. The dough should then have been rotated 360 degrees and rolled out and buttered four times. Put the dough back into the large bowl, cover, and refrigerate for 2 hours or until doubled in bulk.
When the dough has doubled in bulk, turn it out onto the floured surface and roll into an oblong shape about ¼ inch thick. Spread with butter (just a little will do at this point) and sprinkle evenly with brown sugar and cinnamon. Roll the dough over on itself like a jelly roll, and lightly pinch the loose ends to seal. Cut into 1-inch slices. Grease 2 muffin tins and place each slice at the bottom of each muffin container (you can squash them in if necessary). Sprinkle with brown sugar. Preheat the oven to 350 F and let rise for 30 minutes.

Once the buns have risen, bake for 30 minutes, or until golden brown.