Last post I shared some photos from our summer trip to the UK. Today, I’d love to show you some of my favorites from the second half of our trip, where we stopped in Ireland and the Isle of Man.

Our first stop in Ireland was the Antrim coast and the Giant’s Causeway in Northern Ireland. The Giant’s Causeway is an incredible natural formation of basalt columns, many of which broke off to create an uneven network of stones stretching along the coast. It’s like a massive honeycomb of stepping stones.

According to the Fenian cycle in Irish mythology, the giant Fionn mac Cumhaill built the causeway in order to fight the Scottish giant Benandonner, but fled back to Ireland when he realized Benandonner was way bigger than he was. Fionn’s wife Oonagh disguised him as a baby, making Benandonner imagine that the “baby’s” father was absolutely massive. As Benandonner fled back to Scotland in fear, he destroyed the causeway, leaving the formation we see today. 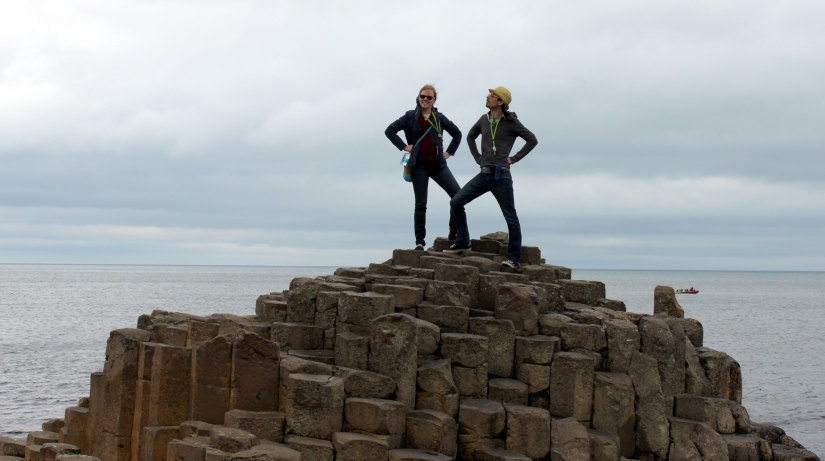 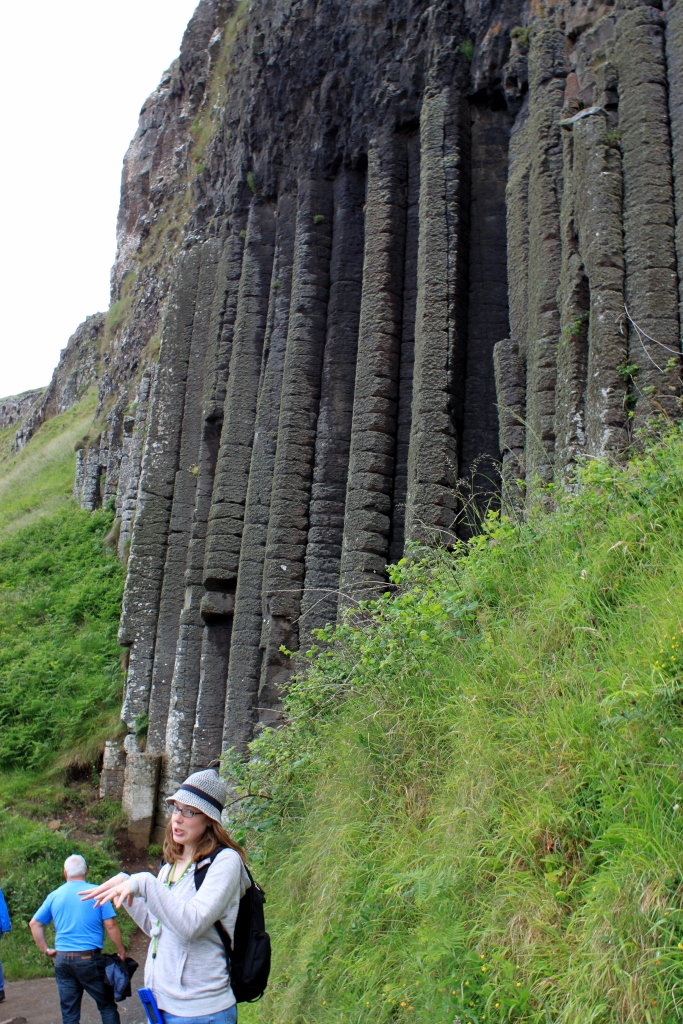 We climbed rocks and pretended to play the Organ (yes, that’s what’s happening there). It’s a huge basalt formation that stretches up into the sky, like a giant’s pipe organ.

Also, I used to play the organ. True fact.

We then climbed the Shepherd’s Steps up to the top of the cliffs, which was a real workout. At the top, I couldn’t resist snapping a photo of scenic cows munching in the fields.

And then…we got to the Isle of Man.

Ever since high school, I’ve been fascinated by the Isle of Man. My great-great-grandmother’s family left the Isle of Man for Ohio in the early 19th century, but they maintained a strong connection with the island for years, and William S. Kerruish, the patriarch of the family, worked with other immigrants in the Cleveland area to keep their Manx heritage alive through dictionaries and lectures. In high school I stumbled across some of those documents while doing research at the Cleveland historical society (yeah…I started young) and things just snowballed from there. It’s been a dream of mine to visit the family seat in the Isle of Man, and now that’s come true.

Plus, there was a tower in the middle of Douglas Bay, which reminded me of I Capture the Castle. It doesn’t get much better than that. 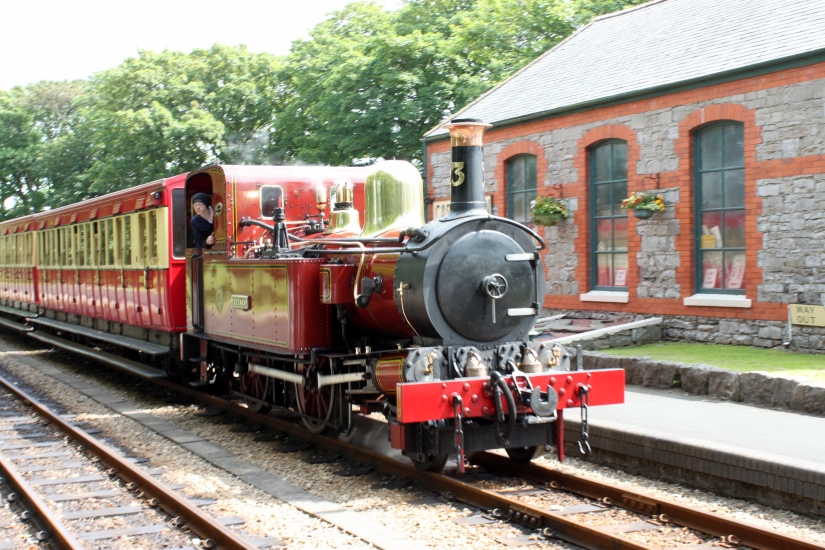 Except for when we rode a Victorian steam train!

I tried to remember everything about that ride, from the way the steam made shadows on the green hills as we passed to the slow jostling of the cars on the tracks. Research. 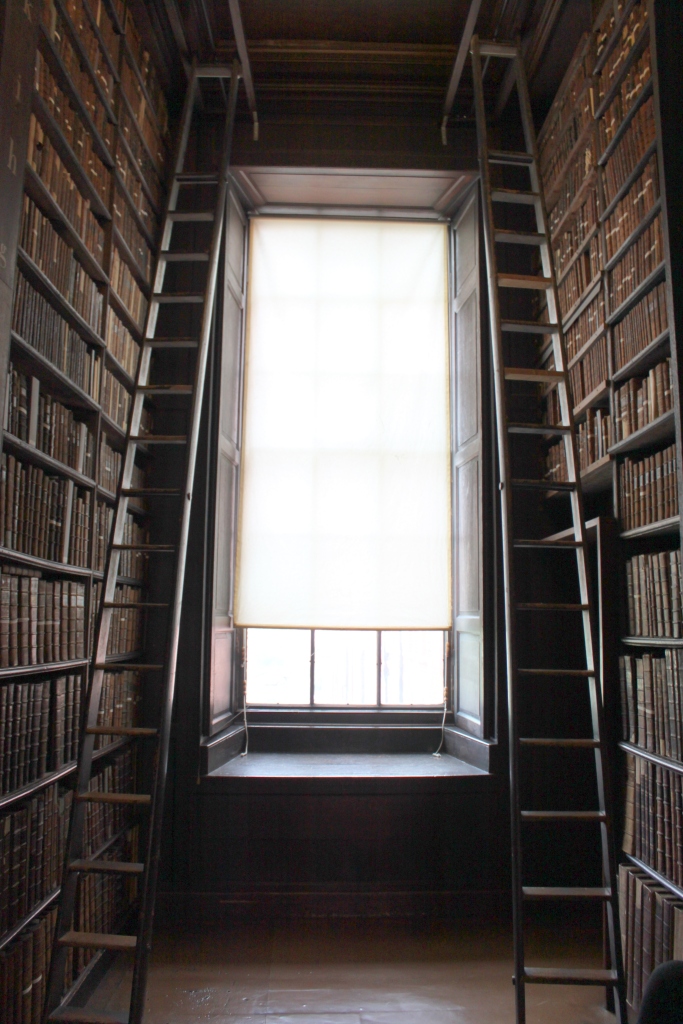 Reluctantly, we left the Isle of Man for Dublin, our last stop. We started by visiting the Best. Library. Ever., also known as the Long Room in the Old Library at Trinity College. Shelves and shelves of old books stretched up to the ceiling, with ladders to help you reach them, and the whole place smelled of brittle paper and worn leather.

You know you’re a reader when the smell of a library is the best thing in the world.

We capped off our final day with a trip to the Guinness Storehouse (naturally), where we learned how to properly enjoy our pints.

It was a whirlwind of a trip, but one we were so lucky to go on. Of course, it’s only whetted my appetite for historical sites in the UK. I sense a research trip in my future…

2 thoughts on “Postcards from Ireland and the Isle of Man”

“Rosy apple blossoms! Rosy apple blossoms! Whoever heard of rosy apple blossoms? Apple blossoms, my dear young lady, aren’t pink. They are white.”
During a lesson on 1980s conservatism, students decided to spend their time well by searching for photos of a young, shirtless Ronald Reagan. It’s the important things.
Portrait, by five-year-old. I’m quite taken with it.
Friends! THIS BOOK!!
Taste testing.
Confession: Before this school year, I’d never read a romance novel. By that I mean a book whose primary purpose is to get the two main characters together. And seriously, why did I wait so long?!