When I took French in middle school and high school, I particularly loved the words that had both literal and figurative meanings. “Petit chou,” you might call your sweetheart, meaning…”little cabbage.” “Pomme de terre” was on the list of grocery store vocabulary as the humble potato, but literally it meant “apple of the earth.” For someone who was beginning to love language, these little linguistic treats made French class that much more fun. (Also, we learned a lot of food words in those first few years. There may or may not have been an epic project where we created a grocery store and bought and sold paper fruits and veggies entirely in broken French. Ah, good times.)

Pain perdu was another one of those phrases that utterly delighted me. Although it refers to something akin to French toast, it literally means “lost bread.” This most likely references the stale pieces of bread that would otherwise be thrown away, were they not soaked in milk and egg and fried to perfection. But it’s a phrase rich with linguistic possibility, making me think, nonsensically, of orphaned pieces of toast, or bread condemned to purgatory. 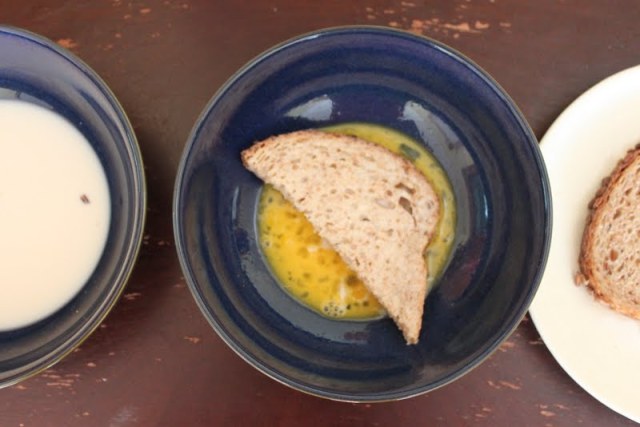 While the best way to describe pain perdu is as French toast, in reality it’s a little different. After soaking slices of stale bread in sugary, vanilla-perfumed milk, you then dip it in a bath of sugared, beaten eggs, after which you fry them in a hot pan. Then you sprinkle with sugar and serve as dessert after a meal. At least, this is how Auguste Escoffier, author of the Bible of French cooking around the turn of the century, described it. As a result, the Crawley family most likely would have followed his advice and eaten this dish after luncheon or a light supper instead of at breakfast. 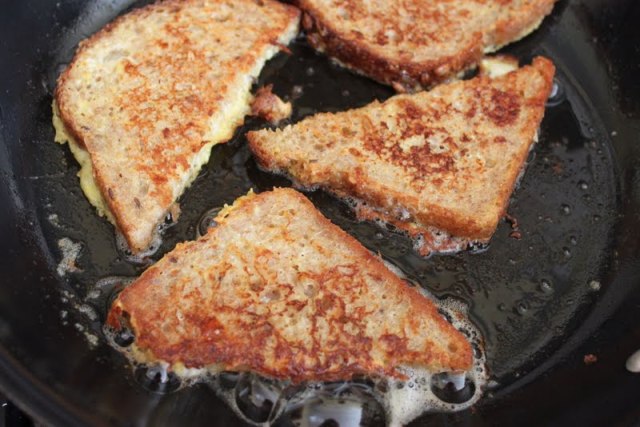 Weird, right? I can’t wrap my mind around the idea of eating French toast after dinner. And really, maybe that’s the true reason we call it pain perdu–it’s lost in the confusion of meals, being served at the wrong time of day. Because if you live at Downton Abbey, you can do whatever the heck you want.

Whenever you eat this “gilded crust,” however (I went rogue and ate it for breakfast), it’s delicious: light and crisp, perfumed with vanilla and dusted with sugar. And dipping the bread twice, first in milk and then in egg, adds a subtle dimension missing from plain old French toast. They sure knew what they were doing in the Downton kitchen.

In one bowl, mix the milk, vanilla, and 1 tsp sugar together until blended. In another bowl, mix the beaten egg and the other tsp sugar until blended. Set a frying pan over medium-high heat and melt the butter. The pan will be ready when the butter is sizzling and a few droplets of water flung in the pan evaporate with a hiss. Just before you’re ready to cook, dip the bread in the milk mixture, drain, and dip in the egg mixture and drain. Fry in the skillet until one side is brown, then flip and brown the other side. Drain on a plate and sprinkle with a bit more sugar. Serve with fruit whenever you darn well please.