When I graduated from college, I moved to New York City to work at a children’s literary agency. I knew almost no one and quickly discovered that I am really not cut out for big city living. While I quietly raged against the masses of people crowding the sidewalks of Manhattan, I tried to carve out a space for myself in this city of millions. I reconnected with a few high school friends, and together we explored restaurants and museums and out-of-the-way shops. Still, there were days when homesickness for small-town Ohio would overwhelm me, and I’d need an afternoon pick-me-up.

That’s how I discovered Tea & Sympathy, an adorable British tea shop in the heart of the West Village. On the recommendation of my mom’s British colleague, I visited the shop one lonely August afternoon and snagged a tiny round table for myself. Wedged in between a table of chatting women and the front window, I ordered a pot of Earl Grey and a plate of scones with clotted cream and jam. The tea arrived steaming hot, accompanied by milk, sugar, and a little tea strainer. (This is where I learned how to pour tea that’s been brewed with loose-leaf.) Balancing my book on my lap, I sipped tea and nibbled on light-as-air scones long into the afternoon. When I re-emerged into the heat of the city, I felt lighter, relieved of some of that loneliness.

Afternoon tea, it turns out, is good for what ails you.

The British knew this well. Once the concept of tea as a meal was firmly established in the late 19th century, it took on different meanings depending on your social class. The working class took tea as their final meal of the day, since they often couldn’t afford a full meal with meat and vegetables. On the other hand, the extremely wealthy (like the Crawleys) took tea as an afternoon snack, dining on fancy cakes and dainties while they gossiped. As those of you who watch Downton Abbey know, this is the time for scheming, when the Crawley ladies plot out what suitors to cultivate and how to manipulate issues of inheritance in their favor. It’s also the time for nursing broken hearts and talking discreetly about intense emotions. As I’ve discovered, there’s nothing like a bracing cup of tea and delicate treats to make you feel better.

While we Americans often think of afternoon tea in conjunction with sweets, the Edwardians also took tea with savory treats like tiny sandwiches. French food was in vogue, so hors d’oeuvres like canapes were on the rise. This brings us to today’s snack: canapes de maquereau. 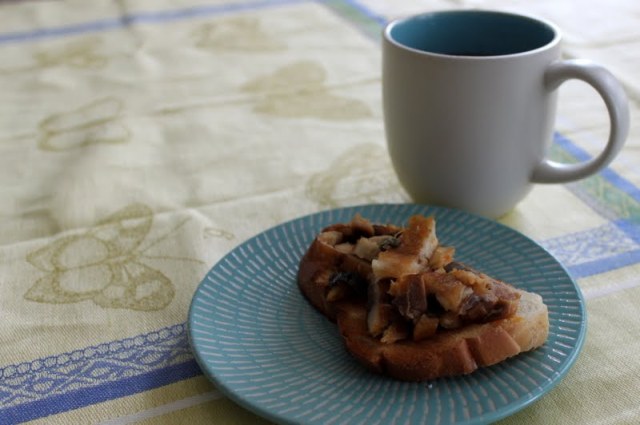 Why yes, we are throwing around a lot of French today.

It’s a simple recipe: thinly slice a piece of smoked mackerel, and bake in a dish greased with cayenne pepper and butter. Top little rounds of toast with the baked fish. It’s a salty, spicy dish (perhaps spicier than the Crawleys might like), one that will make you drink gallons of tea. But after all, when you have matters of the heart to discuss, nothing else will do.

Preheat the oven to 350 F. Combine the butter and cayenne pepper and grease the bottom of a baking dish with the mixture. Slice the mackerel into thin pieces and lay on the greased baking dish. Bake at 350 F for 10 minutes, or until the butter melts and the fish is warmed.

Meanwhile, toast the bread. Top immediately with the fish mixture once you remove it from the oven; be sure to sop up any leftover butter with the fish. Serve with tea.