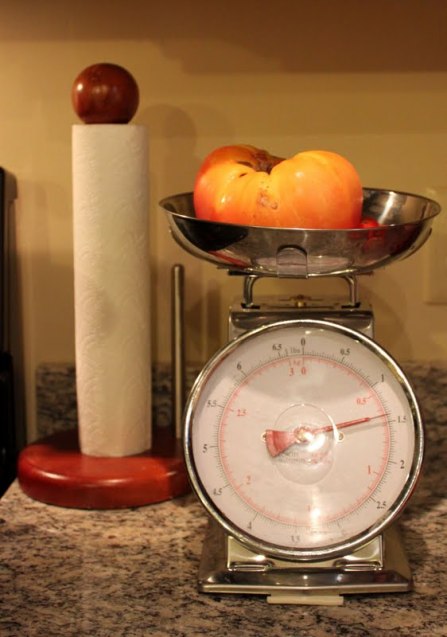 Last Sunday, over dinner at our local Ethiopian restaurant, my friend Nina said, “When can we can?” And thus began a rather silly and ultimately fruitful (heh) endeavor of canning 40 lbs of tomatoes. And making lots of canning jokes. (“Yes, we can” is Nina’s favorite.)

Canning is a fascinating process. Before refrigeration, it was one of the best ways for home cooks to preserve the bounty of their gardens long into the winter. Now that we can easily freeze leftover fruits and veggies, canning has become more of a fun way to preserve food than a necessity. Plus, along the way it’s acquired an exotic sort of aura. Not everyone knows how to can, and the uninitiated tend to see it as a complicated art that requires years of practice. The funny thing is that it’s pretty easy. It just takes time, patience, and a strict adherence to directions. Sort of like ice cream.
Here are the basics:
So it’s not such a difficult process. It just takes a lot of pots and pans. And, as we discovered, tomatoes in particular need a lot of time to process. They’re finicky fruits, those tomatoes.
Nina and I blithely set out to spend yesterday afternoon putting up tomatoes for the winter. Nina’s farmshare gave her an excellent deal on tomatoes, and I picked up a few pounds more to even out the numbers. This meant that we had 40 lbs of tomatoes all together.
40 lbs of tomatoes is a lot of tomatoes, friends. Especially if you’ve only canned twice before, like me, or never, like Nina. This is the point where we began to worry that the afternoon would resemble an episode of I Love Lucy.
Nevertheless, we soldiered on. We set up our army of pots (my canning pot took up 2 burners alone) and boiling water, and arranged an assembly line to peel the tomatoes and prepare them for cooking. We planned on making tomato sauce, which required 45 minutes of simmering before it could be canned, and crushed tomatoes, which only needed 5 minutes. So naturally we began work on the tomato sauce first.

However, by the time we’d finished peeling and crushing the 24 lbs meant for the sauce, the canning pot was ready for processing (understandably, since it was an hour and a half later). So we decided instead to prepare the crushed tomatoes for efficiency’s sake. This took another half an hour of peeling, plus managing which pots would fit on which burners and waiting for the tomatoes to boil. We didn’t actually start processing the filled cans until 3 hours into our canning adventure.

And yes, at this point we’d cracked open a couple of beers and I was sighing, “No, we can’t.”

Would we manage to can all 40 lbs of tomatoes before the end of the afternoon?

Would we lose our minds?

Would we not do it correctly and poison ourselves and everyone we knew with botulism?

Check back tomorrow to find out!