We are pulling Christmas together here in Ohio. Everyone’s pitched in wherever they can, and the house is finally starting to look holiday-ish. We’re winding garlands around the banisters and laying boxwood across the mantle. 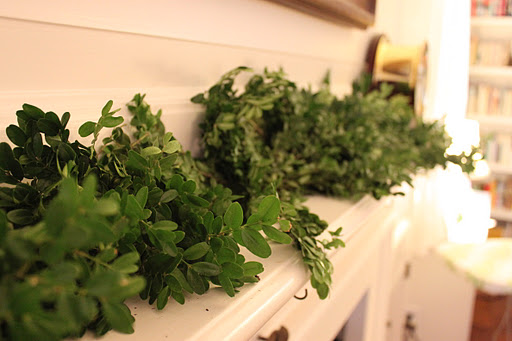 We keep asking each other, “What are we forgetting?” “Are we in good shape this year?” Because usually Christmas Eve feels rather frantic.

And aside from some last-minute wrapping, we are in good shape. There was time enough for baking cookies this morning, and throwing together a quick cranberry-banana bread yesterday afternoon. I even managed to make Brunswick stew, our Christmas Eve staple. Never mind the fact that we’re having Christmas Eve dinner at my aunt and uncle’s house; it’s tradition, so we have to make it. You know how it is.*

I’m not sure where this tradition of serving Brunswick stew came from, since it supposedly originated in the South. And our family is solidly New England/mid-Western. Opposing sources claim that the stew originated in Germany, which might make a little more sense, given my mother’s German ancestors. Whatever the source, it’s been a family staple since my mother was little.

It’s a rustic sort of dish, full of meat that’s falling apart and potatoes that melt in your mouth. If you’re being really true to the colonial Williamsburg recipe, you’d make it with “two Squirrels,” but I decided to grant them a reprieve and use up the last of the Thanksgiving turkey.**

You simmer the turkey, a half pound of ham, and a sliced onion in about three quarts of water for a time, until the water has turned to a  fragrant broth. Since I used pre-cooked turkey and ham, I didn’t have to wait the couple hours that it would take for the meat to cook through.

Then you add lima beans, corn, four diced “Irish Potatoes” (I used Idaho, since I’m not quite sure what Irish potatoes are), and tomatoes. I’ll be honest: I really cheated here. We had frozen lima beans and corn, as well as canned tomatoes, so the only fresh item I stirred in was the potatoes. But sometimes, during the holiday season, you have to cheat a little so it all gets done.

I tossed in a few dried herbs that might have been floating around a colonial kitchen–rosemary, tarragon, parsley–then simmered the stew for about an hour. It was finished just in time for a quick meal with crusty cracked-wheat bread, another family staple that we make whenever we have the chance. 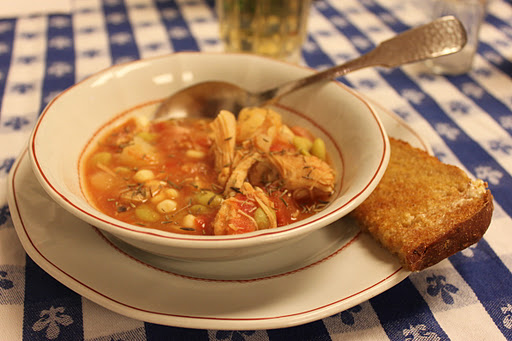 The stew was just the thing for a chilly winter’s night. Warm, hearty, filling; it tasted like Christmas. Funny how you associate holidays with special foods.

If you’re celebrating Christmas tonight and tomorrow, I wish you the best of the season, full of your favorite traditional foods (and maybe some new ones, too). And if you’re not partaking in the holiday, I hope you have a few good meals set aside for this chilly weekend. Try the Brunswick stew! Just spare the squirrels, okay?

* The stew served as our Christmas Eve-Eve meal last night, which was just as good.
** Which was frozen, don’t worry. And it was a Williamsburg turkey, so we were being extra historically accurate!