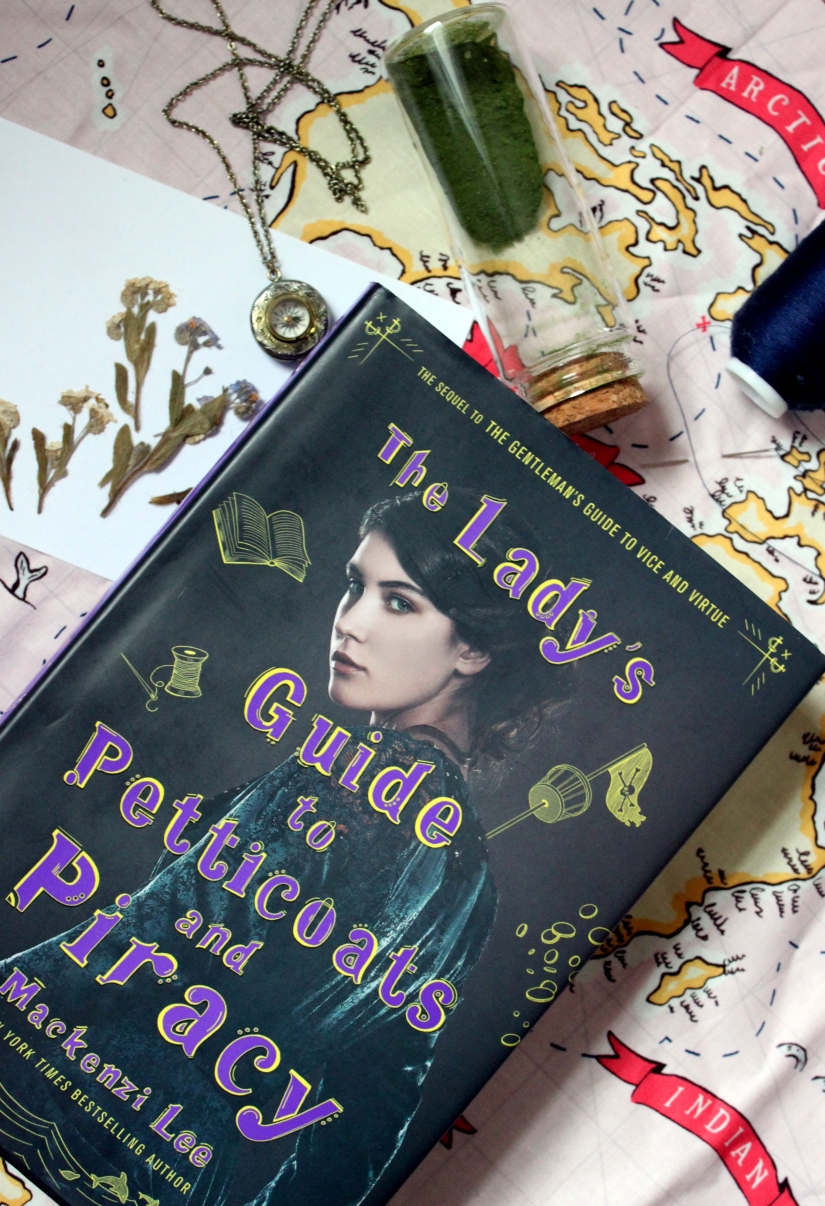 The Lady’s Guide to Petticoats and Piracy by Mackenzi Lee

A year after an accidentally whirlwind grand tour with her brother Monty, Felicity Montague has returned to England with two goals in mind—avoid the marriage proposal of a lovestruck suitor from Edinburgh and enroll in medical school. However, her intellect and passion will never be enough in the eyes of the administrators, who see men as the sole guardians of science.

But then a window of opportunity opens—a doctor she idolizes is marrying an old friend of hers in Germany. Felicity believes if she could meet this man he could change her future, but she has no money of her own to make the trip. Luckily, a mysterious young woman is willing to pay Felicity’s way, so long as she’s allowed to travel with Felicity disguised as her maid.

In spite of her suspicions, Felicity agrees, but once the girl’s true motives are revealed, Felicity becomes part of a perilous quest that leads them from the German countryside to the promenades of Zurich to secrets lurking beneath the Atlantic.

As I work on the latest rounds of revisions on my WIP, a YA historical fantasy, I’ve been incorporating my thoughts on current political conversations – the control women have over the own bodies, say, or the evils of capitalism – into my work. Sometimes it’s intentional, and sometimes I don’t realize I’ve done so until my lovely critique group tells me how well a theme did or did not come through in this latest draft. More and more this is what I’ve come to appreciate about historical fiction: the way it can comment on the connections between the past and the present.

Mackenzi Lee’s The Lady’s Guide to Petticoats and Piracy, a companion novel to her awesomely delicious The Gentleman’s Guide to Vice and Virtue, does just that. With a spiky 18th-century girl determined to pave her own way, Lee highlights the risks women needed to take to achieve their dreams. Plus, her extensive research backs up the “modern” outlook of her 18th-century heroine.

Felicity Montague is desperate to attend medical school, but the men of England’s finest institutions have made it clear that they’ll never welcome a woman. Her only other option is setting aside all ambitions to marry a sweet but dull baker. So when she hears that Dr. Alexander Platt, her idol, is planning to marry her former best friend, Johanna, in Germany, she bucks up her courage and decides to plead with Platt to take her on as a research assistant. The only problem? Felicity has absolutely no money. So when Sim, a young woman affiliated with the pirates who helped the Montague siblings on their previous adventure, offers to pay her way, she jumps at the chance – and ignores all warnings that Sim may have her own reasons for traveling to Germany. Just as Felicity begins to make amends with Johanna, she’s caught up in a race across Europe and North Africa that may cost her the freedom she’s fought so dearly to keep.

You can tell Lee loves her research (woohoo!), as lush historical details set the story firmly in the 18th century. At the same time, Felicity’s comments on the restrictions of her sex sound frighteningly familiar. When she applies for admission to an all-male board of a London medical school, the men deem her “hysterical” for speaking passionately about her merits. Frustrated at every argument, Felicity stalks out, wondering if “maybe I am unsuited for this and maybe I am hysterical, because even though I don’t think I am, it’s hard to be raised in a world where you’re taught to always believe what men say without doubting yourself at every step.” I raged right along with Felicity, both for how damningly obtuse these supposed men of science were, and for the terrible understanding that this still goes on today.

Elsewhere, Felicity struggles with her understanding that women’s value is determined by their desirability, and her desperate desire to “deserve space” in the world. But it’s too easy for one drug-addled, entitled man to crush her dreams. “I should have known I wasn’t a forest fire,” she reflects at a particularly low moment, “but a small flame that could be snuffed out easily by the first man who turned my way with a heavy breath. There is no winning for women in this world.”

Even our stalwart heroine has to examine her own judgements. Since childhood, Felicity’s been convinced that the only way to forge ahead as a woman in science is to make herself as unfeminine as possible. As a result, she looks down on any woman who enjoys typically feminine interests, like elegant dresses and society parties. But the deeper she gets into her adventure, the more she’s forced to make room for different kinds of ambitious women. “Softness can be an armor, even if it isn’t my armor,” she reflects upon watching Johanna. Her friend is a refreshing change from the stereotypical gunslinging heroine of historical fiction, who’s only “strong” because she fights aggressively and mimics masculine traits.

Some critics might deride Felicity for her so-called “modern” ideas. In her author’s note, Lee comments:

Women in historical fiction are often criticized for being girls of today dropped into historical set pieces, inaccurate to their time because of their feminist ideas and independent natures. It’s a criticism that has always frustrated me, for it proposes the idea that women throughout time would not see, speak out, or take action against the inequality and injustices they faced simply because they’d never known anything else. Gender equality and the treatment of women is not a linear progression; it has varied throughout time and is dependent upon a slew of factors, like class, race, sexuality, location, religion, etc., etc., etc. We tend to think of history as less individual than we do about our modern experiences, but most general statements about all women in any historical context can be proven false…Just as there is no single story for women today, there is not one for historical women either.

I practically shouted with glee when I read this, along with Lee’s subsequent research notes about the “forward-thinking” historical figures she studied in preparing her book. Yes, maybe historical fiction, especially that geared towards teens, leans heavily on the proto-feminist heroine. She’s no doubt more relatable than a girl who dreams only of marrying at 20 and birthing a slew of children who may or may not survive infancy. But that doesn’t mean she never existed in the past.

“Rosy apple blossoms! Rosy apple blossoms! Whoever heard of rosy apple blossoms? Apple blossoms, my dear young lady, aren’t pink. They are white.”
During a lesson on 1980s conservatism, students decided to spend their time well by searching for photos of a young, shirtless Ronald Reagan. It’s the important things.
Portrait, by five-year-old. I’m quite taken with it.
Friends! THIS BOOK!!
Taste testing.
Confession: Before this school year, I’d never read a romance novel. By that I mean a book whose primary purpose is to get the two main characters together. And seriously, why did I wait so long?!