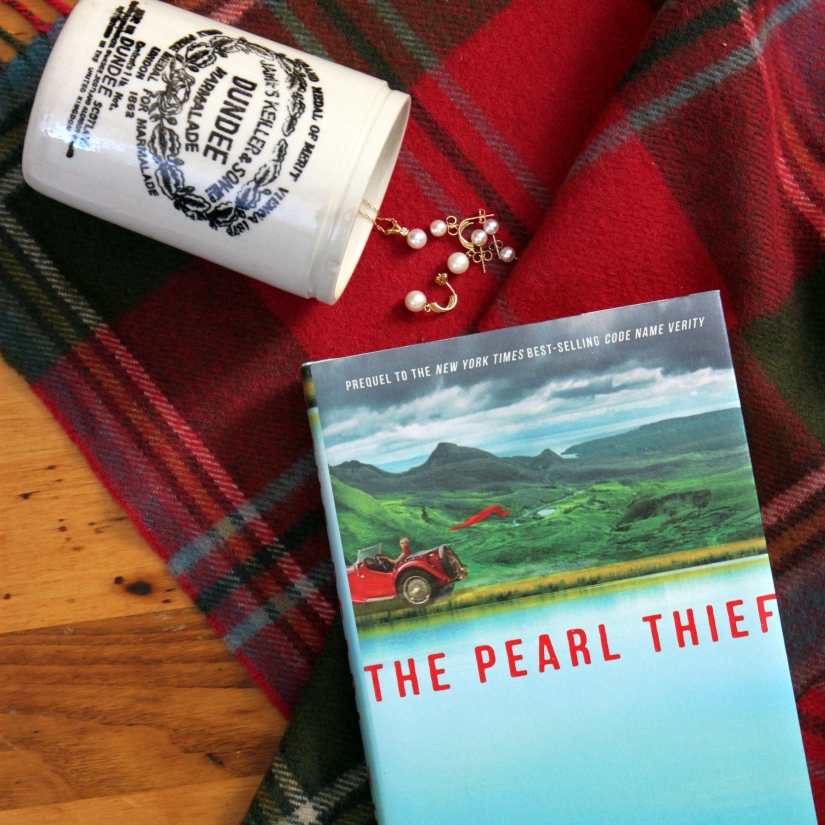 The Pearl Thief by Elizabeth Wein

When fifteen-year-old Julia Beaufort-Stuart wakes up in the hospital, she knows the lazy summer break she’d imagined won’t be exactly what she anticipated. And once she returns to her grandfather’s estate, a bit banged up but alive, she begins to realize that her injury might not have been an accident. One of her family’s employees is missing, and he disappeared on the very same day she landed in the hospital.

Desperate to figure out what happened, she befriends Euan McEwen, the Scottish Traveller boy who found her when she was injured, and his standoffish sister, Ellen. As Julie grows closer to this family, she witnesses firsthand some of the prejudices they’ve grown used to-a stark contrast to her own upbringing-and finds herself exploring thrilling new experiences that have nothing to do with a missing-person investigation.

Her memory of that day returns to her in pieces, and when a body is discovered, her new friends are caught in the crosshairs of long-held biases about Travellers. Julie must get to the bottom of the mystery in order to keep them from being framed for the crime.

This exhilarating coming-of-age story, a prequel to the Printz Honor Book Code Name Verity, returns to a beloved character just before she first takes flight.

On her first day home on summer holidays, Julie Beaufort-Stuart is knocked unconscious. She’s rescued by Euan and Ellen McEwan, who camp on the grounds of Julie’s family home, Craig Castle, every summer. They’re Travellers, moving from place to place depending on seasonal work, and during her recovery Julie realizes that most of her neighbors harbor deep suspicions of these Scottish nomads. She, on the other hand, is fascinated by them–especially by Ellen, whose standoffish manner only makes her more appealing. So when a visiting scholar with ties to Julie’s family turns up missing, the police immediately focus on the McEwans, and Julie takes it upon herself to discover the truth and prove them innocent. Over the course of one glorious summer she develops deep friendships, flirts with romance, and begins to realize her own privilege in a way she never has before.

I have a dirty confession: while I read Code Name Verity when it came out to great acclaim, I…didn’t get it. Sure, I loved the WWII setting and the firm friendship and the twisty narrative, but I didn’t see what all the fuss was about. Fast-forward years later, and I approached The Pearl Thief, Elizabeth Wein’s prequel to Verity, with some trepidation. But! A family estate being broken up? An unusual mystery set in Scotland? A plucky teen girl realizing the prejudice faced by others? This sounded right up my alley.

And friends, I loved it.

Because here’s the thing: this book is about loss and growing up during one beautiful, final summer. With the death of Julie’s beloved grandfather, her family can no longer afford to keep up Strathfearn, their estate, and it’s being broken up during this fateful summer. The house itself is being refurbished as a school (complete with a swimming pool that plays a key role in the mystery), but there are questions as to who will maintain the rest of the land, and whether or not it will be preserved for the Travellers. Of course, Julie and her brothers are dealing with the impending loss of their beloved home, but over the course of the summer she realizes that Ellen and Euan have just as much of a deep attachment to it as she does. When she and Ellen take an impromptu hike up to a nearby castle, she discovers they both explored the same areas as children, and that Ellen’s just as saddened by Strathfearn’s loss as she is.

Julie’s family history begins to take on a heightened importance as she wrestles with this understanding. One night she awakens to a feeling of being haunted by her own ancestors:

I was suddenly, sharply, overwhelmingly aware of all Strathfearn’s quiet, hidden, ancient past–my vanished medieval great-grandparents who left behind the empty, towering halls of Aberfearn Castle–and their vanished great-grandparents, who carved the starey-eyed fish on the standing stones that were already old; and the folk before them who left nothing but strange green mounds and iron blades; and those who built the buried boat and raised the walking stones.

I thought: Their blood runs in my veins. They are alive in me.

It reminded me of my own summer after my freshman year of college, when we spent three months packing up my grandparents’ home as they prepared to move to a retirement community. I discovered the family letters that would eventually lead to my senior thesis and, even later, my first novel. For the first time I was fully conscious of this past that had been preserved through papers and knickknacks and souvenirs. And it was made all the more poignant by my own sense of loss at saying goodbye to my grandparents’ house.

Julie’s impending personal loss is tempered by her own coming-of-age, as she plays with the power of her sexuality in flirtations and other encounters around town. But when she learns that, in the aftermath of her accident, she was examined at the hospital to make sure she wasn’t raped, she’s horrified by the power others seem to exert over her own body:

I wished that did not make me feel so dirty every time I thought about it. The reality of having been examined was somehow much nastier, in my head, than the assault that didn’t happen and which I couldn’t really imagine. Almost as if people were trying to blame me for what wasn’t done. As if my body were rude and lewd just because it was a girl’s body.

And though I won’t spoil the ending, Julie must ultimately come to terms with these realizations when she figures out the solution to the scholar’s disappearance.

At that The Pearl Thief might stand as a beautiful, thought-provoking glimpse at one girl’s last summer of childhood, one that gave me the same nostalgic yearning as one of my favorite books of all time, I Capture the Castle. But Wein also peppers the book with subtle hints at Julie’s future in Code Name Verity: she can adopt accents on the turn of a dime, yearns for “complicated railroad journeys and people speaking to me in foreign languages,” stands up for her friends in the face of extraordinary social pressure. And though yes, I didn’t fall for Verity the first time, knowing Julie’s fate in that book made Pearl, which burns with all the vitality of a girl on the edge of great things, all the more poignant.

So now I’m rereading Code Name Verity. And it is so much more lovely and devastating than my first go-round, and I have The Pearl Thief to thank.

2 thoughts on “Book Review: The Pearl Thief by Elizabeth Wein”