Maybe it’s due to the current political climate, which makes me want to scream every morning when I open the newspaper. I want to know that despite twists and turns and betrayals, everything will, in the end, turn out okay. Note the “okay” rather than “just fine;” Sherlock Holmes stories, like many mysteries, always provide a resolution to the central problem, but it’s not necessarily a happy one. Holmes’ client in “The Adventure of the Dancing Men,” for example, winds up dead, and his wife seriously injured. Still, Holmes solves the mystery and delivers a sound rebuke to the culprit. Stories like these both acknowledge that life isn’t perfect and, at the same time, provide the comfort of a solution. Right now it feels like that solution is missing in America.

So in the meantime, here are a few of my favorite Sherlock Holmes adaptations and series, in case you’re also hoping to squirrel yourself away in the cozy warmth of 221B Baker Street:

The premise is incredible for the famous bachelor detective: fresh into his retirement in the Sussex Downs, Holmes takes on an apprentice, the brilliant Oxford scholar Mary Russell. Told from Russell’s point of view, the books trace their adventures together first as colleagues, then as husband and wife. I devoured these books when I was in middle school, and recently I’ve accidentally begun rereading the entire series (new books are still coming out!). The atmosphere and tone are pitch-perfect, and Mary’s world is one I never want to leave. (I’ll admit I read them partially for the accounts of days spent at the Bodleian followed by solid meals and hot baths – so cozy.) 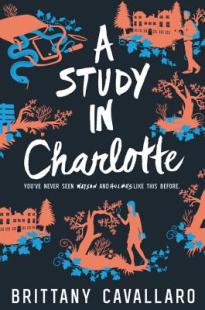 A Study in Charlotte by Brittany Cavallaro

This contemporary YA re-imagines Sherlock and Watson as Charlotte and Jamie, the descendants of the famous duo who (of course) get pulled into a crime at their Connecticut boarding school. It’s smart, twisty, and chockfull of references to the original stories, and the updated details (like Holmes’s lab in the science building) ring true while still feeling fresh. The second book in this trilogy was just released on Tuesday, and I can’t wait for my copy to come in from the library.

A.K.A. the Robert Downey, Jr. series. Fun and irreverent, the movies emphasize the brawling, physical side of Holmes without losing any of the detective’s brilliance and adding some great witticisms. Plus, Watson as a handsome ladykiller? Yes, please. The mystery in the first film has a touch of the occult that would make Conan Doyle proud, and Hans Zimmer’s score (using a thoroughly destroyed piano) is the twitchy, fast-paced cherry on top.

The New Adventures of Sherlock Holmes

The adaptation that started my passion. This radio show originally aired in the 1940s, starring Basil Rathbone (Holmes) and Nigel Bruce (Watson). My dad would play cassette tape recordings in the car when we were little, and my sister and I just fell in love with them (so much so that we can recite the sponsor ad to this day). Set up as Watson’s reminiscences, the show always began with the sponsor (our preference was Harry Bartel for Petri Wine) sitting down by a roaring fire while Watson recalled one of his lesser-known adventures with the great detective. They’re fun, creative mysteries with atmospheric sound effects, making for great listening. Apparently you can find them here – highly recommended. 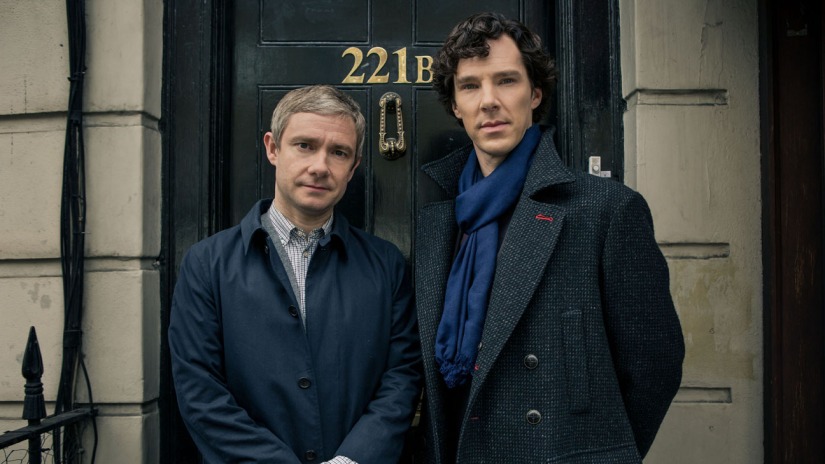 Obviously, I couldn’t leave out the BBC show. Like A Study in Charlotte, half the fun of this series is the way creators Mark Gatiss (who also plays Mycroft) and Steven Moffat update the Holmes canon for the modern era. Watson writes a blog about their adventures, Holmes is constantly texting, and rather than smoke a pipe, he has a nasty nicotine patch habit. The mysteries themselves are a mash-up of the original stories that have been refashioned for the show’s purposes, and it’s exhilarating and exhausting trying to keep up with all the references and figure out what’s coming next. Sometimes the storytelling gets a little too self-consciously clever, but the show is tremendous fun, and I’m probably going to rewatch the early seasons while I wait impatiently for the next one.

And that’s it! Do you have any favorite adaptations to share?

PS. It’s fairly well-known by this point that Sherlock Holmes never actually said, “It’s elementary, my dear Watson.” This article traces the evolution of the saying.