About a month ago I posted about some of the mentor texts I’ve been reading in preparation for a YA historical fantasy I want to write. I’ve tried to read a wide range of books, as I figure out exactly how much fantasy I like in my history. Today I’m going to share some books that travel down side roads: connected to historical fantasy, yes, but with unique flavors of their own.

First up is Susan Dennard’s Something Strange & Deadly, a steampunk adventure with zombies, dashing inventors, and a resourceful heroine. What is steampunk, exactly? I like to think of it as historical fantasy with cool gadgets, but authors often use the genre to re-envision the Victorian era, giving women and historically oppressed groups more agency or just having a lot of fun with clockwork gears. It’s becoming so popular that one of my 7th-grade students looked at an image of a 19th-century power loom and said, “Cool! That looks steampunk.”

Anyway, Something Strange & Deadly places Eleanor Fitt squarely in the midst of a zombie apocalypse during the 1876 Philadelphia World’s Fair. Her brother has disappeared, so she enlists the help of a dashing inventor and his Spirit-Hunter team, who are trying to find the source of all these freshly-revived corpses. The book and its sequels (a trilogy in total) feature a lot of fun gadgets, from the special gun the Spirit-Hunters use to stop the zombies to the hot-air balloon they use to get around Paris. I loved the sense of adventure that Dennard maintained throughout the trilogy, as well as the way she incorporated existing technology–and Americans’ fascination with new machines–into the decidedly fantastical story. 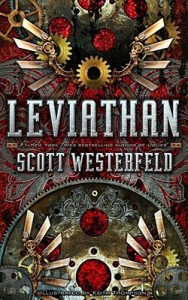 Bridging the gap between steampunk and alternate history (where a major historical event or timeline is disrupted, creating a recognizable but altered historical past) is Scott Westerfeld’s wonderful Leviathan trilogy. Westerfeld re-imagines World War I in a world where Britain has developed “Darwinist” weapons, or genetically-engineered animals, while Austria-Hungary and Germany have developed “Clankers,” or steam-driven metal machines. Aleks and Deryn, from the opposing sides, are caught in the middle when the war explodes. I especially enjoyed the way Westerfeld could explore both perspectives through his characters, and you get to see both the utter senselessness and inevitability of the war. Plus, the second book goes to steampunk Istanbul. What could be more fun?

Firmly on the side of alternate history (though you could argue that there’s some steampunk gadgetry in there) is Jenny Davidson’s The Explosionist, which I actually read a few years ago. Set in an alternate 1938 Scotland, where Napoleon actually conquered England, The Explosionist features spiritualists, political bombers, and hydrogen-powered cars. After hearing an upsetting message from a medium who dies shortly thereafter, Sophie and her friend Mikael begin investigating a series of mysterious explosions. What they discover threatens the future of Europe itself. I enjoyed Davidson’s inventive re-imagining of Europe, based on one major change, since she extrapolates wildly from Napoleon’s victory and creates a vivid world with believable technology. By the same token, though, I had a little trouble accepting the way she altered famed intellectuals’ achievements; for example, Sigmund Freud becomes nothing more than a ridiculous radio host. Little things like that tended to draw me out of the world instead of immersing me more deeply. Nevertheless, Davidson’s use of imagination here is inspiring.

The more I read, the more I’m finding myself drawn to these more inventive worlds, where some pretty major things have changed from historical fact. With historical fiction, you’re always walking a tightrope between what actually happened and what could have happened, and I found that alternately reassuring and restrictive when working on my last book. The freedom of alternate history is definitely calling!