This summer we’re trying out a CSA, or “Community Supported Agriculture.” Each week we pick up a manageable amount of fresh vegetables (and sometimes a potted plant!) from a nearby farm. Having paid the farm in advance for the season, we receive a certain amount of credit that can go towards any of the produce available that day. I like this system because it gives me a certain amount of choice–I don’t always have to get kale every week, for example. Plus, I was already familiar with the farm, having picked up my friend Nina‘s share a few times last summer. Since I’m pretty averse to change, this was a good deal.

We’re splitting our share with another friend, and still trying to figure out exactly what to do with all the veggies. (And also how to plan our menus accordingly.) Last week, for example, we got a bunch of carrots, but neither Josh nor I had major meal plans that included carrots. So I hauled out my trusty historical cookbook collection and selected a carrot pudding from colonial America.

Amelia Simmons, author of one of the first truly “American” cookbooks (1796), wrote American Cookery at a time when America was transitioning from a British-ruled colonial melting-pot to a unique, independent country. She was certainly influenced by English recipes (and she lifted many of them directly from other books). Indeed, food historian Karen Hess notes that the carrot pudding recipe is very similar to Tudor recipes for custard puddings. And the produce Amelia Simmons called for originated, in many cases, in Europe, carrots not excepted. So this recipe for carrot pudding looks backward rather than forward. 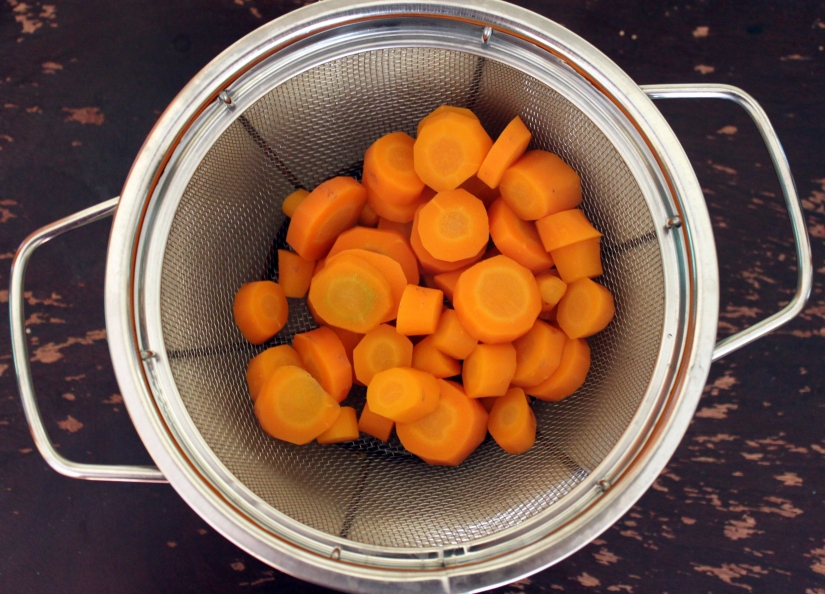 It takes a bit of work, mostly in boiling and straining the carrots (I’ll admit to watching a video on making strained carrots for babies to get the right technique). And the taste isn’t particularly carroty–it’s more eggy and sweet, as you’d expect a pudding with these kinds of ingredients to be. The one thing you may not have in your cabinet is rosewater, which was used like vanilla extract in early American cooking. But vanilla will do just as well.

In a medium saucepan, cover the carrots with water and bring to a boil. Reduce heat and simmer for about 20 minutes, or until tender. Drain and press carrots through a sieve to remove the tough fibers.

Beat the sugar and butter together in a bowl, and add the eggs. Add the strained carrots, cinnamon, and rosewater. Mix until smooth and pour into the prepared baking dish. Bake at 350 F for 1 hour or until pudding is set on top.