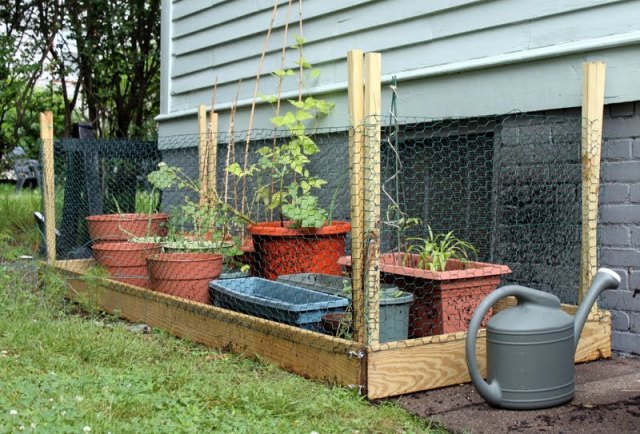 Josh and I have something of a squirrel problem in our backyard kitchen garden. Accustomed to running free and wild thanks to the apartment’s no-pet policy, these squirrels are daring. They take risks. They chew on plants and dig up bulbs with abandon. But the last straw came when they started munching on my still-ripening strawberries. We decided it was time to take action.

On the advice of my dad, a long-suffering veteran of the wars against backyard rodents, we built a basic fence to enclose the container garden. Josh prefers to call it a “squirrel vault,” which to my mind implies a cage for keeping squirrels in. But whatever, it sounds majestic and menacing. And he did most of the hard labor. 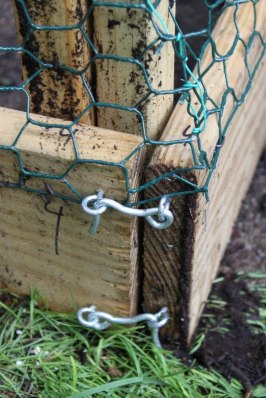 After measuring the length and width of our container collection, we had four two-by-fours cut at the hardware store. Hoping to keep the fence/vault portable, we chose to use hook-and-eye latches to hold the four sides together. Then we stapled vinyl-coated poultry wire to the boards to keep the vicious varmints out.

So far, the squirrel vault has held strong, though we may have to add a roof (which my dad recommends). The gauge of the wire is small enough that the squirrels can’t poke their heads in, and we tied the sides together to prevent them from crawling in. Unfortunately, the backyard drains poorly, so the fencing has collected water during our many epic rains. Pros and cons to the squirrel vault, but we’ll take it.

Fencing in the Past

Thomas Jefferson used ten-foot tall fencing, called “paling,” at his late-18th century Monticello estate to keep out deer and other domestic pests from his vegetable garden. This consisted of boards placed tightly together, “so near as not to let even a young hare in.” While other gardeners, especially hard-working housewives, probably didn’t have the luxury of ten-foot tall boards, many families constructed at least a short fence to demarcate their gardens and hopefully deter some critters.

I kind of want that ten-foot tall fencing for my own garden. I bet Thomas Jefferson never had trouble with squirrels…

1 thought on “Fencing in the kitchen garden”