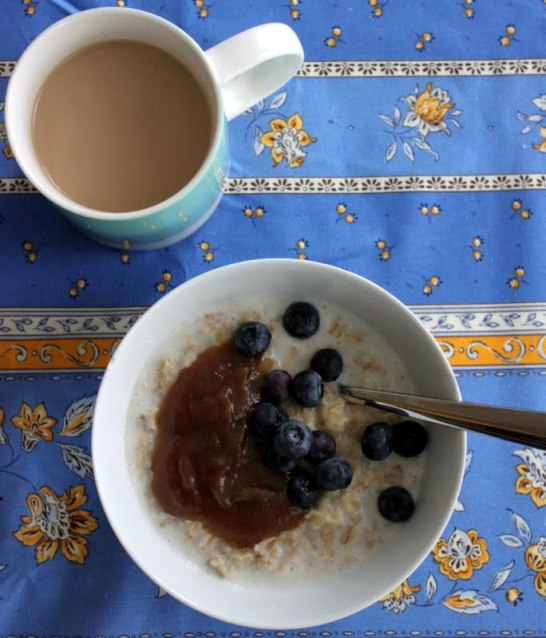 We’re safe and sound here in Providence. The hurricane swept through yesterday and we stayed snug in the apartment, catching up on schoolwork and relaxing. There were several hours of Diablo III (Josh) and of baking cheesy pull-apart bread (me). There was an evening of catching up on our favorite shows and watching The Adventures of Tin-Tin. And today the weather’s clear and sunny, but we’re still off from school while Rhode Island pulls itself back together.
Just like last year when Irene stopped by, we were extremely lucky not to lose power or face flooding. These two days off from school have been more like surprise snow days (minus the snow) than anything scary, and I’m thankful for that.
If you’re still battening down the hatches to weather out the rest of the storm, or if you’re just hankering for a comforting, homey taste of fall, might I suggest some apple butter? Freshly made over the weekend, this apple butter spiced up my morning oatmeal and kept me warm long into the day while the wind screamed outside. It’s just what I needed to get ready for the colder months ahead.

I adapted this recipe from Liana Krissoff’s excellent Canning for a New Generation, so it’s not technically a historical recipe. Krissoff helps you bypass the labor-intensive parts of making apple butter the traditional way, allowing you to slow-cook the butter in the oven instead of stirring it constantly on the stove. Still, the hours spent in the oven imbue this apple butter with a spicy, old-fashioned goodness. Once the apple butter was thick and dark, Nina came over to help pack it up in half-pint jars. (This canning thing is becoming a habit of ours.) We also put up some applesauce she’d made the day before, and we ended up with a pretty decent haul. If we don’t hoard our cans all winter long (trust me, it’s tempting), we’re thinking they’ll make excellent gifts come the holidays.
Stay safe, friends, and help yourself to some apple butter.
Do you have any tips for making it through storms and snow days? I’d love to hear.
Apple Butter
(adapted from Canning for a New Generation by Liana Krissoff)
makes between 6 and 10 half-pint jars
6 lbs apples, peeled and cored and chopped into small pieces (I used a combination of Macintosh and Granny Smith)
2 cups apple cider
roughly 1 1/2 cups brown sugar
1 1/2 tsp ground cinnamon
1/2 tsp ground cloves
1/2 tsp ground allspice
Put the apples in a large saucepan, together with the cider and 4 cups of water. Boil over high heat, stirring occasionally, until the apples are mostly mushy and broken down, about 40 minutes. Puree the mixture in batches in a blender until smooth, and measure before pouring it into a medium Dutch oven. Preheat the oven to 300 F.
Into the apple mixture, stir in 2 tbsp brown sugar per cup of puree (this is why you measured it earlier). Stir in the spices. When the oven is hot, bake the apple mixture for about 2 hours, stirring occasionally, until it’s thick and dark and the kitchen smells of spice.
If you’d like to can the apple butter (this recipe makes a lot), set a canning pot full of water to boil on the stove. Wash the jars and lids you’ll be using, and set the jars in the canning pot to keep them hot. Put the lids in a heatproof bowl and ladle some of the hot water from the canning pot into the bowl to cover the lids.
Remove the apple butter from the oven and set on the stove over medium heat until it’s boiling. Once the canning pot is boiling, remove the jars from the pot with a jar lifter and place them upright on a towel. Remove the jar lids from the bowl and set on a plate.
Working quickly, pour the apple butter into the jars, leaving about 1/2 inch headspace in each jar. Place a lid on top of each jar and lightly screw on the ring, so it holds but is still loose. Use the jar lifter to return the jars to the canning pot, making sure they’re upright and covered by at least 1 inch of water. Bring the canning pot to a boil and process for 10 minutes. Remove the jars and place on a towel. Check the lids to make sure they’ve sealed after 1 hour (when you press the center of the lid, it shouldn’t push down or pop back up). If any haven’t sealed, refrigerate immediately. Don’t move the sealed jars for 12 hours. When they’ve finally cooled, label and store.
Advertisement