Our inaugural recipe is a real winner. A slab of salt pork, sliced and fried into the crispiest, unhealthiest morsels. It’s doused with a gravy made from milk and the pork fat left over in the pan. Oh, my–I could feel my arteries hardening just as I read through the recipe.

Salt pork is a slab of pork, often fatback, that’s been salted into submission. In the 19th century, the salt helped the pork keep without refrigeration, so you could stock up at the country store and then dip into your cellar storage when needed. Despite knowing this beforehand, I’d never actually seen salt pork, and I wasn’t sure what to expect.*

It came out of the package as a dense white chunk, sparkling with salt crystals. It hardly smelled like anything. But it sliced up easily enough, and I set the slices in a skillet of water to boil off some of the salt. (I later found out that most salt pork has at least some red meat in it–I guess I ate only fat that day. Alas.)

Once the pork had boiled, I rolled the slices in flour and set them to fry. The pork fried up fast, brown and crispy.

I poured off most of the drippings (all that glistening pork fat in the pan) to keep for later, since this stuff was prime cooking fat back on the prairie. Better than butter for those pioneers! Then I whisked flour and milk into the tablespoon of drippings left to make a gravy. I served the whole dish on a plate, with a generous salad to off-set the pork (and the guilt). Tentatively, I took a bite. 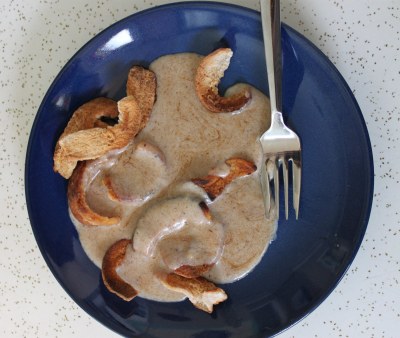 That pork tasted like the best bacon I have ever had. Crispy, melt-in-your-mouth, almost too rich for a full serving. The milk gravy dulled the taste a bit, which maybe was the point–I can’t imagine eating an entire meal of fried salt pork. But if I’d been out working in the fields all day, maybe I’d approach it with a little more abandon.

Good, rich food, a simple recipe–it can’t all be this easy…

*I’ve found salt pork in the meat section of my local Whole Foods and Stop & Shop.